OUR donor partners are philanthropic leaders and experts, sharing the belief in a collaborative approach to solving the gun violence epidemic in California. Knowing that no one organization can do it alone, funding partners share a vision that California can be a blueprint for the country through its implementation of a strong public health and community-based approach to preventing everyday gun violence.

Akonadi Foundation’s mission is to support the development of powerful social change movements to eliminate structural racism and create a racially just society.

To build and sustain community power and racial justice movement building, Akonadi Foundation focuses funding on ecosystem grantmaking. The term highlights the importance of the diverse web of relationships among the communities, organizations, and political formations that Akonadi supports.

Akonadi Foundation believes that this approach is an effective, comprehensive, and values-driven way to support the work of successful movements for racial justice and social change. To achieve maximum success in building the capacity of racial justice movements, Akonadi Foundation believes they must not only identify and support people and organizations that explicitly think, act, and talk about racial justice; but they also encourage collaboration and coordination among those organizations.

To build lasting and equitable solutions that make California the healthiest state and end domestic violence.

Strong, vibrant communities where all people are heard, respected and engaged. Innovative networks that increase access and opportunity for people to thrive. Social norms and policies that help create, sustain and reinforce equity. Health, safety and well-being for all Californians.

Blue Shield of California Foundation believes in a future that is not yet here; and they are investing in the partnerships to make such a future possible.

The California Endowment envisions a California that leads the nation as a powerful and conscientious voice for wellness, inclusion, and shared prosperity.

The California Endowment’s mission is to expand access to affordable, quality health care for underserved individuals and communities and to promote fundamental improvements in the health status of all Californians. We don’t focus on prescriptions. We focus on fixing broken systems and outdated policies, ensuring the balance of power is with the people. We don’t focus on the individual, we focus on the larger community as an ecosystem of health. We work with citizens and elected leaders to find lasting solutions to impact the most people we possibly can. The goal is simple: First, change the way people view health—from the notion that health happens in the doctor’s office to a belief that health happens where you live, work, learn, and play. We call this “narrative change.” Second, integrate smart solutions in communities across the state. We do this by working with our partners and grantees to fundamentally change “the rules”—laws, policies, and systems—that impede health in our communities. Building Healthy Communities is our 10-year $1 billion-funded initiative that aims to bring health to where we live, learn, work, and play. We’re changing the narrative around health to ensure health and justice for all.

Improving California’s health care system, so it works for all Californians.

The California Health Care Foundation is dedicated to advancing meaningful, measurable improvements in the way the health care delivery system provides care to the people of California, particularly those with low incomes and those whose needs are not well served by the status quo. We work to ensure that people have access to the care they need, when they need it, at a price they can afford.

The vision for the California Wellness Foundation is for every resident of California to enjoy good health and experience wellness.

The mission is to protect and improve the health and wellness of the people of California by increasing access to health care, quality education, good jobs, healthy environments and safe neighborhoods. Over the years, The California Wellness Foundation has taken on some of the most contentious issues of our time, all focused on advancing health and wellness for underserved people. The earliest efforts connected public health and gun violence prevention, and supported teen pregnancy prevention, healthy working conditions and place-based grantmaking that took a broader view of health. Today, California Wellness supports organizations working to increase access to health care, quality education, good jobs, and clean and safe neighborhoods across our state.

The CARESTAR Foundation’s mission is to improve health outcomes for all Californians using a racial equity lens to fund and advocate for improvements to our emergency response system.

The CARESTAR Foundation focuses grantmaking on programs that connect, coordinate and create partnerships between the groups that care for trauma and emergency patients. They fund a range of ideas and initiatives – including programs that train bystanders to “stop the bleed” at an accident scene, software that helps paramedics gain better electronic communication with hospitals, and relationships between trauma centers and non-profit organizations that are designed to help victims of trauma stay safe from re-injury.

Cedars-Sinai is a national leader in providing high-quality, patient-centered healthcare encompassing primary care as well as specialized medicine and conducting research that leads to lifesaving discoveries and innovations.

Since its beginning in 1902, Cedars-Sinai has evolved to meet the healthcare needs of one of the most diverse regions in the nation, continually setting new standards in quality and innovation in patient care, research, teaching and community service. Today, Cedars-Sinai is widely known for its national leadership in transforming healthcare for the benefit of patients. Cedars-Sinai impacts the future of healthcare globally by developing new approaches to treatment and educating tomorrow’s physicians and other health professionals. At the same time, Cedars-Sinai demonstrates a longstanding commitment to strengthening the Los Angeles community through wide-ranging programs that improve the health of its most vulnerable residents.

The David Bohnett Foundation is committed to improving society through social activism by pursuing the mission by providing funding, state-of-the-art technology and technical support to innovative organizations and institutions that, in addition to meeting funding guidelines, share the same vision.

The David Bohnett Foundation is committed to improving society through social activism by pursuing the mission by providing funding, state-of-the-art technology and technical support to innovative organizations and institutions that, in addition to meeting funding guidelines, share the same vision.

The Foundation works with its many partners to advance sustainable solutions in climate and clean energy, enable groundbreaking research in science, enhance the education of our youngest learners, and support human rights for all people.

Horizons Foundation has fueled the LGBTQ movement in the Bay Area and beyond by supporting nonprofits that help thousands of people every day. Their work strengthens community organizations and their leaders, mobilizes donors and funders, inspires giving, and actively secures the LGBTQ community’s future for generations to come.

Horizons supports organizations in every part of our diverse LGBT community, specifically targeting smaller, newer organizations, which, for all intent and purposes, have few other possibilities for foundation support. Horizons Foundation works to ensure that our young people thrive in safe and supportive homes and schools; that our elders can age with dignity and in community; that we will safeguard and expand the rights we’ve fought so hard to win; that our histories will be told; and that our community will always be able to protect and support those who need it most.

Kaiser Permanente exists to provide high-quality, affordable health care services and to improve the health of our members and the communities we serve.

Kaiser Permanente is committed to helping shape the future of health care. We are recognized as one of America’s leading health care providers and not-for-profit health plans. Founded in 1945, Kaiser Permanente has a mission to provide high-quality, affordable health care services and to improve the health of our members and the communities we serve.

The W.K. Kellogg Foundation supports children, families and communities as they strengthen and create conditions that propel vulnerable children to achieve success as individuals and as contributors to the larger community and society.

The W.K. Kellogg Foundation was established in 1930, by the inventor of ready-to-eat breakfast cereal, W.K. Kellogg, in his hometown of Battle Creek, Michigan. His signature became well known. But the man behind it was characterized by extraordinary humility and a visionary belief in people.

W.K. Kellogg cared about children, the conditions in which they were raised and what the future held for them. He believed in the power of communities to forge solutions for the health, happiness and well-being of their children. And, he wanted to equip people with the knowledge and resources to pursue those solutions.

Vision, humility and belief in people are the values stewarded by the Kellogg Foundation for 90 years. Today those values take form in community-led efforts on behalf of thriving children, working families and equitable communities.

Liberty Hill Foundation’s founding mission is to provide resources to those of us who are denied power—people of color, the poor, women, LGBTQ people, and others.

These resources help communities organize and demand equality, a life with dignity, and respect. Liberty Hill also supports the necessary conversations that a new movement is inspiring about new strategies to dismantle racism in America.When Liberty Hill began in 1976, it was a daring new foundation that turned philanthropy on its head. Today it is a national leader in social justice. Organizing and advocacy powered by Liberty Hill has changed national policies, launched social change movements, transformed neighborhoods, and nurtured hundreds of community leaders who respond to the experience of injustice by fighting for their rights.

The Rosenberg Foundation works together with grantees, other funders and experts to dismantle the systemic barriers that stand in the way of equity, freedom and opportunity for far too many Californians.

From their early work supporting efforts on behalf of Japanese American families returning from internment camps to their most recent initiatives to reform the state’s approach to criminal justice and public safety, The Rosenberg Foundation’s aim has remained consistent: to change the odds so that all Californians can thrive in our democracy and economy.

Today, The Rosenberg Foundation continues to support brave and bold leaders who are on the leading edge of confronting racial and economic injustice. The current focus of the Foundation is on ending over-incarceration and undoing the impacts of the broken criminal justice system on our communities, transforming inhumane and destructive immigration policies, stopping the exploitation of low-wage and immigrant workers.

The Foundation invests in and serves as a catalyst for ideas, partnerships, and programs that improve health and quality of life in Northern California through convening, educating, and strategic grantmaking. Sierra Health Foundation has a broad definition of health, believing there is much more to health than health care. It is influenced by many factors, including socioeconomic conditions, environment, education, income, and individual behavior choices – factors that have come to be known as the Social Determinants of Health.

Silicon Valley Community Foundation is a comprehensive center of philanthropy. Through visionary leadership, strategic grantmaking and world-class experiences, we partner with donors to strengthen the common good locally and throughout the world.

A family foundation dedicated to improving life outcomes for young people through education.

The Stuart Foundation works to uphold Elbridge Amos Stuart’s commitment to the education and well-being of children. Since 1985, the Foundation has invested more than $400 million in people, programs, and ideas that improve the lives of children in California and Washington.

To build a better Southern California by supporting nonprofit organizations to more effectively serve the underserved.

The Weingart Foundation seeks to achieve inclusion and opportunity for all Southern Californians, especially for those who have historically been excluded due to their race, income level, gender, religion, immigration status, disability, age, sexual orientation, or zip code. To achieve this goal, the Foundation’s grantmaking program and other support are designed to strengthen the capacity and effectiveness of nonprofit organizations, collaboratives, and coalitions working to meet essential needs, expand opportunity and eliminate structural barriers to equity by building the community power required to sustain long-term prosperity. Our vision is: 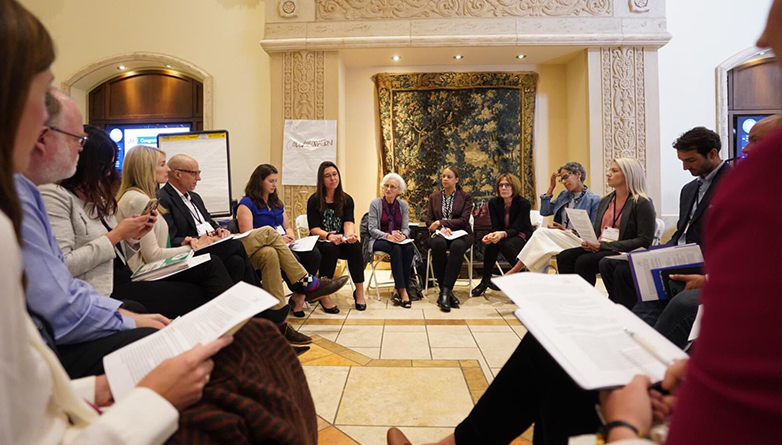 Join forces with our passionate foundation partners to expand the funding dedicated to gun violence prevention in California.