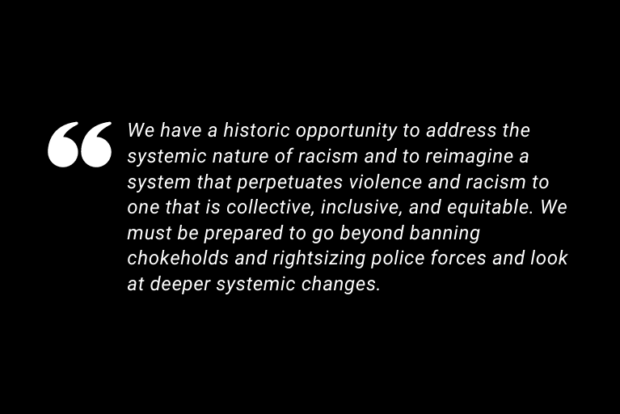 We currently find ourselves focused on serious systemic issues brought forth by the murders of George Floyd, Ahmaud Arbery, Rashard Brooks, Breonna Taylor, and many more names on a list that is far too lengthy. At this moment, our collective focus centers on the brutality captured by police body cams and cell phones showing the most intolerable offenses and lack of restraint forced upon communities of color. The images and voices are being etched into our souls through a cacophony of 24-hour cable news and social media. The stories cannot be ignored; nor should they.

While much of the news coverage focuses on law enforcement as a culprit or cause of transgression, police are just one institution within the larger criminal justice system. They represent the visible tip of an enormous iceberg (the system) which goes deep below the surface. From maternal mortality, where Black mothers are dying at three to four times the rate of non-Hispanic white mothers to black and brown children who are dying by everyday gun violence, the system as a whole is broken. It is racist and it is killing people every single day — not all of which is played out on body camera footage, sparking global outrage.

Collectively, this system funnels young men and women of color onto a neverending conveyor belt into a system that criminalizes and commodifies their incarceration and supervision. Those working in these areas often take issue with the notion that these institutions are racist. Personalizing the issue is one part of the problem, but not recognizing that institutional racism predates their tenure is far more problematic. Lost in the past is the often-nefarious reason that these institutions were initiated and exist in the first place. As many have noted, the end of slavery did not end racism — slavery was rebranded and evolved into criminalization and other forms of forced labor. In the end, humans of color remained a financial commodity.

Although current events culminating in the murder of George Floyd, were catalysts that triggered a new wave of activism, it was the culminating effect of over four centuries of atrocities and racism that led to that community response. Without minimizing the horrors of historical and systemic violence and victimization, it’s important to recognize the significance and magnitude of the impact of indifference on the part of the criminal justice system. Public safety institutions, including police, were created to foster conditions that make people feel safe. While this may hold true for white communities, it is still an aspiration for communities of color and often creates more anxiety and trauma than a sense of safety. Whites and people of color have always experienced the world differently and most people of color must consider the unintended consequences of calling the police; pondering if it is worth the trouble.

White America has been responsible for defining public safety based on their experience but is now struggling to reconcile the dissonances between these two experiences and worlds in which they live. In an equitable world, systems that define and dictate our lives would be defined by the collective experience of everyone.

Where do we go from here? We have a historic opportunity to address the systemic nature of racism and to reimagine a system that perpetuates violence and racism to one that is collective, inclusive, and equitable. We must be prepared to go beyond banning chokeholds and rightsizing police forces and look at deeper systemic changes such as:

These ideas are intended to serve as a mere starting point in our attempts to dismantle the components of a system that has racist implications. Let’s work together to put forth strategies that institutionalize equity by disincentivizing the commodification of people of color through criminalization and dehumanization.

If this moment is just about police reform, we will have wasted an opportunity to create a more equitable world, where vulnerable and marginalized communities and people of color are not only treated like their white counterparts but are also afforded the levels of protection, access, resources and safety that we all desire and have rights to. How we define public safety is not the end, it is just the beginning and only one piece of the puzzle. How we define the value of life is the bigger picture – the bigger system we must reimagine and equitably recreate.